It has been claimed that bookmakers have flagged to the FA that a suspicious amount of money was placed on one of Mikel Arteta’s (Arsenal Football Club) players to get a yellow card during a Premier League fixture earlier in this campaign.

English football’s governing body is looking into the claim, but the player’s identity remains unknown due to legal reasons. Gambling insiders are said to have described the amount of money placed on the yellow card as ‘highly unusual.’ ‘Spot betting’, as it is commonly known, involves gambling on individual outcomes and poses a threat to governing bodies compared to regular betting, such as a team winning match.

Support from far a field as Sunday League football are joining in the English football-wide omission from Twitter and Instagram etc to make it clear to social media companies that more must be done to eradicate online hate, also highlighting the importance of educating people in the ongoing fight against discrimination within all walks of life.

The stand is, of course, against the ongoing and sustained discriminatory abuse received online by players, staff and many others connected to football and the wider community.

It is good to see the football community against all forms of discrimination, because abhorrent online abuse will not be tolerated. It is not expected that the 4-day boycott from 30 April to 4 May 2021 by the big names in the Premier League will eradicate abuse, however it does demonstrate that football is willing to take proactive steps in this continued fight against discrimination.

The supporters who engage in this disgraceful rejection of anti-racism think they’ve won. The game has done a lot to clean up its image, but it was undone in seconds when some fans booed players kneeling for Black Lives Matter. When both sets of players decide to take a knee in support of the Black Lives Matter movement an encounter begins with a small number of the crowd being heard booing.

On the other hand, the Environment Secretary (2020) George Eustice said: “There has been problems obviously with racism in football in the past. It is right that that is called out and challenged when we see it.

“It doesn’t have any place in society today and if people choose to express their view in a particular way that should always be respected.”

He added: “I know obviously the issue of race and racial discrimination is something that we all take very, very seriously.

“My personal view is that Black Lives Matter – capital B, L and M – is actually a political movement that is different to what most of us believe in, which is standing up for racial equality.

“Each individual can take their own choices about how they reflect this and I know a number of people feel quite strongly and have taken that approach.”

Formula One motor racing legend, Bernie Ecclestone, has given several extraordinary interviews regarding the Black Lives Matter movement and insists that the sport does not have a problem with racism. However, the commissioning of Lewis Hamilton as a Black Lives Matter as political campaigner caused a rift within the motoring world. Lewis Hamilton accepted the role as a Black Lives Matter ambassador in remembrance of the death of America’s George Floyd whilst in police custody following on from a minor incident Minnesota. It was in June 2020 that Lewis began his aim of pushing society and motor sport towards increased diversity. Bernie Ecclestone commented on Lewis Hamilton’s actions by saying he would be “very unhappy if Lewis took past instances of racist abuse seriously”. And, also that “in lots of cases black people are more racist than white people are”.

Speaking to CNN Sport, Bernie Ecclestone expressed his view that no one in F1 has taken systemic racism seriously because they are “too busy trying to win races”.

Dagenham & Redbridge FC (The Daggers) have announced that 2020 will be their tenth year for “Daggers Against Racism Day” which celebrates its commitment to diversity within football. The club’s spokesman said, “I am very proud of our long-standing partnership with the community in which we all live and the national recognition that we have achieved through these days”. They bring together: the many diverse cultures where we live and demonstrate our commitment to discrimination in whatever form it may take.”

The club’s managing director went on to say, “I would also like to thank our major sponsor who is accelerating inclusive regeneration in Barking and Dagenham. Their sponsorship demonstrates their commitment to the community and its mission to make sure regeneration works for everyone.”

(Pictured: Ossie Ardilles manager of Tottenham Hotspurs in the mid-1990s)

The most successful English (British) managers are few. However, by applying their trade to the best of their knowledge have made them to become the most excellent managers. For example, the past gave us Brian Clough, Sir Alf Ramsey, Sir Bobby Robson and Ian Paisely and of course Sir Alex Ferguson (Scottish/British). On the other hand it is no surprise to read that the all-time top most successful twenty managers who represented the premier league are all foreign nationals. Foreign coaches may be commonplace today, but once upon a time they were a novelty on these shores.

The Rooney Rule helps to address the lack of representation of BAME managers in English football – but we have to first face society’s inherent racism. The debate in favour of the FA ruling says that the manager’s position is a “leadership role as much as a technical one, and positions have been given on the strength of personality, character and likeability.”

The Rooney Rule, which requires at least one BAME candidate to be interviewed for every coaching role, is being implemented by the FA but not yet by the Premier League, and only on a voluntary basis by the EFL. There will be those from the institution who will lament the fact that many are introducing race into an issue where race is not an issue, and who will also ignore the data in favour of their own intuition, which tells them that everything is fine and these people are just making trouble. Cynics will tell themselves and also believe that they are the real victims; and the BAME community are the real persecutors. Mostly non-BAMEs will despise organisations like the official Kick It Out movement and the arguments they present. Once again many will decry the BAME’s for playing the race card. However the Independent newspaper has been quoted with the statement “you don’t need to play the race card if you’re already winning the game”. Perhaps being ignorant is one of true facts behind this major issue? 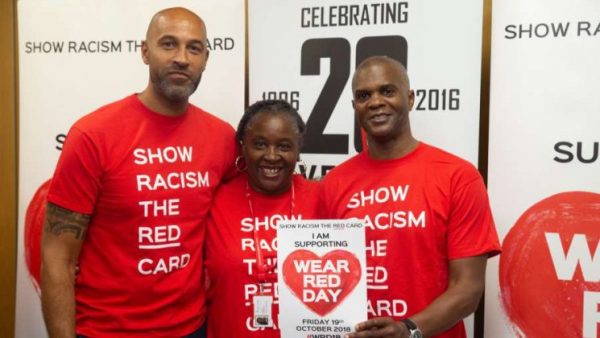 Goodison Park, 21 February 1988. Everton were playing host to local rivals Liverpool in the fifth round of the FA Cup, when England striker John Barnes – who’d joined the club from Watford the previous summer – back-heeled a banana off the pitch. Accompanied by chants of “Everton are white”, it wasn’t the first banana to be thrown at the only Black player gracing that game.

Arguably Barnes had the last laugh, finishing his first season at Anfield with a champion’s medal and the accolade of being voted Professional Footballers’ Association player of the year. But John Barnes was not the first, or the last footballer in the UK to be on the receiving end of racist abuse.

In 1993, five years after the incident at Goodison Park, Kick It Out was launched to lead and co-ordinate equality and diversity training for professional footballers at all levels.

Importantly, there are now mechanisms in place to deal with racism. And education is key. Jason Lee (ex Charlton and Notts County) works in equalities, and Paul Davis (Arsenal FC 15 years) has been involved in similar workshops and initiatives, educating both players and fans about how to behave.
When they were playing themselves, there was no education around the subject. “To survive and stay in the game, we just had to deal with it,” says Jason. “That’s what we were told. Whereas now, players realise they can take a stance.”

Paul recalls that, “I wasn’t encouraged by my club to take on situations, where they probably should have been taken on. Back then, they’d say we just had to ‘turn the other cheek’

Twenty-five years on, the organisation continues to provide support by mentoring young people who aspire to careers in football, as well as working closely with football authorities, clubs, players and communities to tackle all forms of discrimination. It also provides a facility for football supporters to report incidents of abuse, both via its website and through a mobile phone app.

UNISON has been working with and supporting Show Racism the Red Card since it was founded.

I am regularly monitoring Arsenal Fan TV following their club’s campaign in the 2016/2017 season. Arsenal fans were filmed fighting and using bullying tactics inside the Emirates Stadium during match games. The club’s leadership are aware of this and will share the national anti-bullying campaign number to all of their fans affected by this form of aggression.