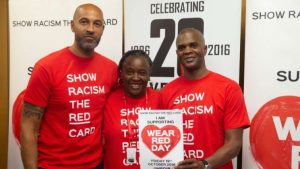 Goodison Park, 21 February 1988. Everton were playing host to local rivals Liverpool in the fifth round of the FA Cup, when England striker John Barnes – who’d joined the club from Watford the previous summer – back-heeled a banana off the pitch. Accompanied by chants of “Everton are white”, it wasn’t the first banana to be thrown at the only Black player gracing that game.

Arguably Barnes had the last laugh, finishing his first season at Anfield with a champion’s medal and the accolade of being voted Professional Footballers’ Association player of the year. But John Barnes was not the first, or the last footballer in the UK to be on the receiving end of racist abuse.

In 1993, five years after the incident at Goodison Park, Kick It Out was launched to lead and co-ordinate equality and diversity training for professional footballers at all levels.

Importantly, there are now mechanisms in place to deal with racism. And education is key. Jason Lee (ex Charlton and Notts County) works in equalities, and Paul Davis (Arsenal FC 15 years) has been involved in similar workshops and initiatives, educating both players and fans about how to behave.
When they were playing themselves, there was no education around the subject. “To survive and stay in the game, we just had to deal with it,” says Jason. “That’s what we were told. Whereas now, players realise they can take a stance.”

Paul recalls that, “I wasn’t encouraged by my club to take on situations, where they probably should have been taken on. Back then, they’d say we just had to ‘turn the other cheek’

Twenty-five years on, the organisation continues to provide support by mentoring young people who aspire to careers in football, as well as working closely with football authorities, clubs, players and communities to tackle all forms of discrimination. It also provides a facility for football supporters to report incidents of abuse, both via its website and through a mobile phone app.

UNISON has been working with and supporting Show Racism the Red Card since it was founded.